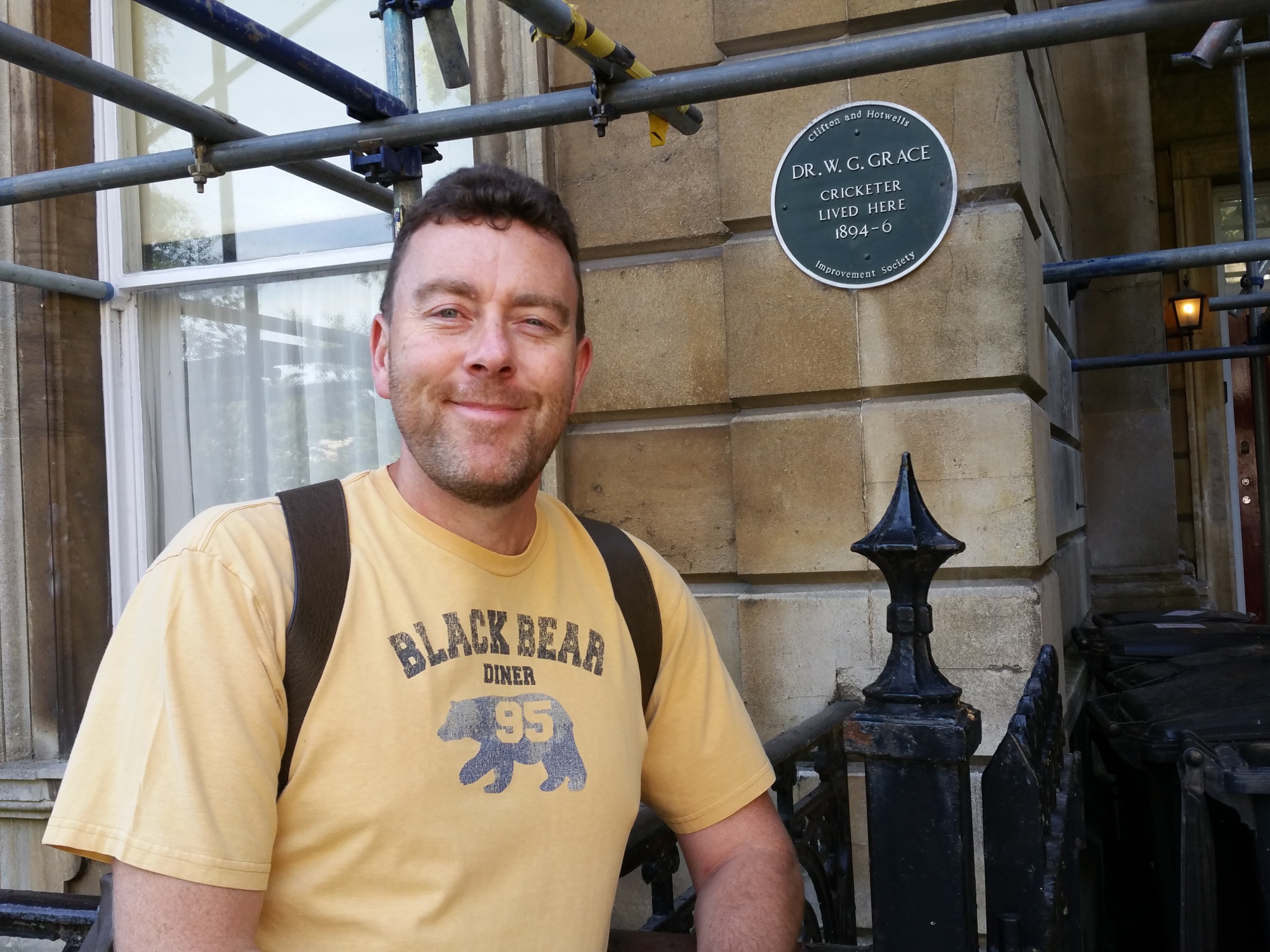 As this is my first post about Treasure Trails as a way to explore I should draw your attention to this disclosure. Notwithstanding the fact that I write Treasure Trails and design clue hunts and games for a living, I still think they are an amazing way to explore, and I love doing other people’s Trails whenever I get the chance. And this is true for whether it’s somewhere new or familiar. Geoff has worked in Bristol for several years, he has partied in the bars, eaten in restaurants, been on street art tours, and jogged and run its streets and parks. But he’d be the first to admit that the Treasure Trails we did this weekend showed him a new face of this fantastic city.

I confess, I sounded a bit like a broken record by the end of the day:

It feels so … so… continental!

.. and it wasn’t just the beautiful weather. I regret now not taking more photos to illustrate the point, but around many corners there were streets, facades, benches, architecture, scenes that simply and suddenly evoked scenes from France or Spain. It was a very pleasant sensation and gave this city a feel of being something quite special and different. I suggested to Geoff in one street that it was perhaps the heavy Georgian influence with the square, stuccoed merchant houses, or possibly the distinctive, chunky sandstone brick. Geoff added that one of the loveliest things about Clifton in particular is the number of little gardens and squares which are heavily planted with shrubs and trees. It makes the city ‘breathe’ and feel cooler and more livable.

Here’s a tunnel of trees we discovered in Clifton. They pass through an abandoned cemetery which is open to the public to be used for games or picnics or quiet sitting and reading.

Clifton is a beautiful location for a Trail. The streets are quiet and leafy, the views over the gorge and Clifton Suspension Bridge are spectacular (if a bit scary for vertigo-sufferers), and then you arrive in Royal York Crescent, a historic parade of Georgian townhouses with a stunning panorama across the city to the south-west. You finish by exploring amidst the stylish buzz of Clifton village centre.

Bearing in mind that I’d missed out on my bacon sarnie earlier at Pomphrey Hill, I managed to cover quite a lot of the Trail without getting ‘hangry’. Finally, in Clifton Village, surrounded by eating-and-drinking houses, I caved to my need for calories. We chose The Clifton, a Mitchells and Butlers pub in Regent Street. I concluded I deserved a burger. With chips. And mayonnaise. Geoff went for the fish and chips and although I didn’t try it, I KNOW it was delicious, because the thin fries that I had were cooked in the most amazing-tasting fat and one look at the batter on Geoff’s fish told me it would be cooked in the same… but I digress…

Earlier in the Trail we had passed by Clifton College, an historic boys’ public school up near the zoo (well worth a visit if you’ve the time, it’s a nice one). Geoff, who is a bit of a cricket buff, had told me an interesting ‘claim to fame’ related to Clifton College. In June 1899 a 13-year old school boy, A.E.J. Collins, had scored the highest ever number of runs, 628 not out. His record stood until 2015, when Pranav Dhanawade, a 15-year-old Indian boy scored 1,009 not out from 327 balls for KC Gandhi School.

Now, inside the gateway to Clifton College, the names of hundreds of Old Cliftonians killed in the first and second world war (and subsequent campaigns) are inscribed in the stone. We stepped in to have a look and there, amongst the names, was that of A.E.J. Collins. A real tragedy, and a sad moment to look at all the names, all the former students whose lives were lost.

Later in the Clifton Trail, there was a clue relating to the home of a celebrated cricketer. Geoff was excited, perhaps this was again to do with the young man he’d just told me about? But when we found it, it was in fact referencing another sporting hero, W.G. Grace, who was also a resident of Clifton.

After finishing Clifton (approx two hours to complete) and working out the treasure location from the clues, we decided to treat ourselves to a cold beer. Unbelievably civilised to just grab a table outside one of Clifton’s bars and observe the passers-by. However, the afternoon was still young enough for more exploring, so we bravely decided to tackle a second Trail.

This one started down at College Green, just above the Waterfront area of Bristol, but we’d seen from the clues that the route came up to the Wills Memorial Building (part of the University of Bristol), further up the hill towards our current location. So we took on the clues from half way round, worked our way back down the hill to the end, then went back to the beginning of the Trail proper, climbing uphill to the Cabot Tower for a spectacular panoramic finale. This Trail is the ‘Banksy’ Trail of the Bristol ones, we saw at least three of Banksy’s famous works on the way, plus some other street art and many historic facts and features.

Once in College Green, having spied the original (as in very first) Banksy across the road, there was a little VW van selling ice cream in bowls. Eating ice cream is not something I often do, but again it was so nice to just sit there by the Green, by the fountains, and take the weight off our feet for a while. But not for long…

Geoff had never been in Brandon Hill Park, the large hillside park which is home to the Cabot Tower, so this was a welcome chance for him to explore somewhere new. It was such a nice park. There were many groups, couples and individuals sitting or lying on the hillside, plenty of choice of sun or shade, and of course views over the rooftops of Bristol towards the south west.

We both enjoyed both our Bristol Trails very much. It’s hard to choose finally which of the two I preferred, and I’d recommend them both. Worth pointing out that both routes include several steep hills to climb and descend, so they are definitely not wheelchair-friendly and scarcely manageable with a pushchair. After doing parkrun in the morning, our poor leggies were struggling by the end, so we grabbed a refreshing cup of tea before heading back to the hotel to get ready for our evening meal.

Here’s a selection of photos from our Trails. 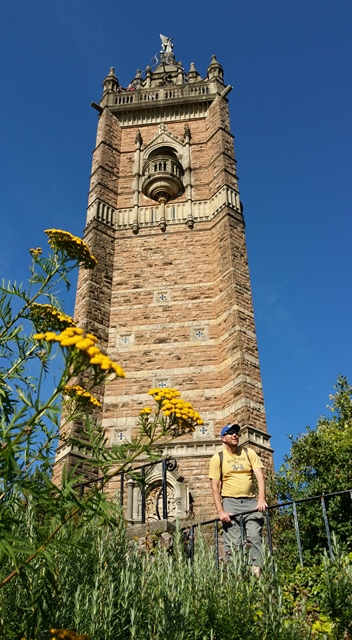 The Cabot Tower – worth the climb 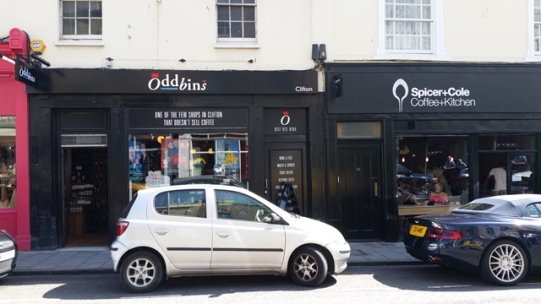 Lots of coffee shops in Clifton! 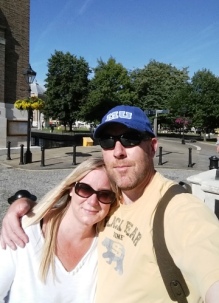 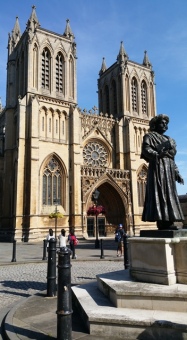 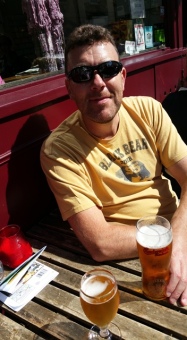 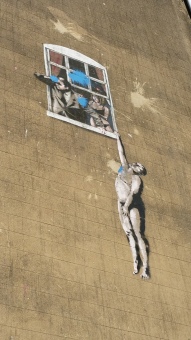 The first ever Banksy

Clifton is now the groovy edge of the increasingly cosmopolitan city of Bristol. This was a great way to see the new and the historical side of it.

A taste of Rio and a rediscovery

For dinner, we strolled along Whiteladies Road in Clifton, easy reach of our boutique B & B, the Clifton House Hotel. I had a sudden hankering for South American food, having spotted a Mexican place earlier. Or maybe it’s just that it’s the Summer of Rio? So when we saw Las Iguanas, that was perfect. I selected Dadinhos, perfect little fried cubes of smoked cheese, and then had a burrito with a side of gooey fried plantain. Mmmm deep fried cheese and bananas (ish), what’s not to love? A couple of Caipirinhas and some Brazilian and Mexican specialities later, and we were ready for another stroll!

I remembered about three years ago when I’d been planning an event in Clifton and had  accidentally found a charming pub/theatre along a residential side road. At the time I remember wishing I could go in for a drink and thinking ‘Ah well, another time!’ Well then, ‘another time’ turned out to be this Saturday evening. After a few wrong turns (the pub is NOT where Google maps says it is but one street further north) we arrived at the Alma Tavern and Theatre. A gorgeous cultural gem in deepest Clifton. Wish it was our local… maybe we’ll be back there one day on a Monday quiz night or to see a performance. Or like some of the locals there on Saturday, just to play a game of Cluedo!

Here’s the Trip Advisor reviews for

The Alma Tavern and Theatre

One thought on “Is this Bristol or another continental city?”